Contrail Networking is a simple, open, and agile cloud network automation product that implements an SDN architecture. With its scale-out microservices architecture, Contrail orchestrate virtual network overlays at the performance and scale of even the most dynamic and large clouds. Service providers can use Contrail Networking to accelerate the deployment of innovative new services, while enterprises can use it to increase agility by enabling the migration of applications and IT resources to more flexible hybrid cloud environments.

Enterprise IT is under increasing pressure to become agile and accelerate value to the business by adopting hybrid cloud architectures and delivering Infrastructure as a Service (IaaS), Container as a Service (CaaS), and Platform as a Service (PaaS) to their stakeholder lines of business.

Enterprises and service providers expect to seamlessly migrate their existing physical infrastructure—incorporating millions of dollars of equipment and years of operational experience—to the cloud era without having to “rip-and-replace.”

Juniper Networks Contrail Networking addresses these challenges with a pure softwaredefined approach that spans the boundaries and use cases of most physical infrastructure, orchestration systems, DevOps tooling, virtualization runtimes, and operating systems. It unifies policy for network automation across those variables with seamless integrations for systems such as: Kubernetes, OpenShift, Mesos, OpenStack, VMware, a variety of popular DevOps tools like Ansible, and a variety of Linux operating systems with or without virtualization like KVM and Docker containers. Contrail Networking reduces the friction of migrating to cloud by providing a virtual networking overlay layer that delivers virtual routing, bridging, and networking services (IPAM, NAT, security, load balancing, VPNs, etc.) over any existing physical or cloud IP network. It also provides multitenant structure and API compatibility with multitenant public clouds like Amazon Web Services (AWS) virtual private clouds (VPCs) for truly unifying policy semantics for hybrid cloud environments.

Contrail Networking’s control and management systems are also designed as scale-out cloud-native software with a containerbased microservices architecture that supports in-service upgrades. Because of its capacity to scale, Contrail Networking can orchestrate virtualized, automated networking for the most demanding elastic cloud and NFV use cases. Based on proven open networking standards, open APIs, and the OpenContrail open-source project, Contrail Networking integrates with orchestration systems through plug-ins that accompany the control and management systems; for example, the OpenStack Neutron plug-in allows you to drive SDN equally well from the OpenStack or Contrail Networking GUIs and APIs. Delivering predictable business agility and a low cost of ownership, this cloud networking platform will enhance and future-proof your investment in creating IT as a Service (ITaaS) with DevOps automation and bringing applications to the cloud.

On the journey to an agile and connected future, it’s best to work with an innovative technology leader who understands the enterprise and service provider industries intimately—a partner with significant experience in both networking and IT who builds solutions based on open principles. Contrail Networking stands out by delivering software-defined cloud networking and cloud service automation in a way that gives customers freedom of choice, intelligent automation, and always-on reliability. 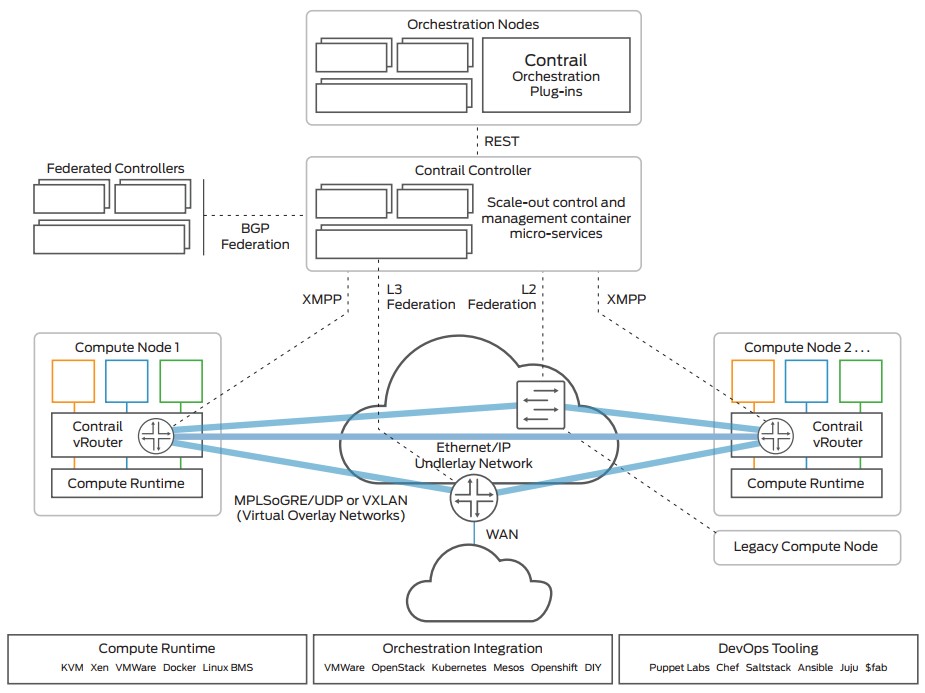 Contrail Networking is comprised of the following key components:

Contrail Networking management Web GUI and plug-ins integrate with orchestration platforms such as Kubernetes, OpenShift, Mesos, OpenStack, VMware vSphere, and with service provider operations support systems/business support systems (OSS/BSS). Many of these integrations are built, certified, and tested with technology alliances like Red Hat, Mirantis, Canonical, NEC, and more. Contrail Networking sits under such orchestration systems and integrates northbound via published REST APIs. It can be automatically driven through the APIs and integrations, or managed directly using the Web GUI.

Contrail Networking control and management systems, commonly called the controller, have several functions. Chief among them are the following functions:

Contrail Networking vRouter runs on the compute nodes of the cloud or NFV infrastructure. It gets network tenancy, VPN, and reachability information from the control function nodes and ensures native Layer 3 services for the Linux host on which it runs or for the containers or virtual machines of that host. Each vRouter is connected to at least two control nodes to optimize system resiliency. The vRouters run in one of two highperformance implementations: as a Linux kernel module or as an Intel Data Plane Development Kit (DPDK)-based process.

Open Source, Open Standards for Seamless Interoperability: Contrail Networking eliminates the need for rip-and-replace by supporting many standards-based protocols, enabling interoperability in a multivendor physical infrastructure to maximize investment protection. Contrail Networking’s only requirement of the underlay network is IP connectivity, which is simple to design at scale in an interoperable way. In addition, complete source code and product binaries are available under the Apache v2.0 open-source license for all customers and partners. For more details, please visit www.opencontrail.org.

Dynamic Service Chaining: Contrail Networking provides dynamic service chaining of virtualized or physical network functions that simplifies the creation, deployment, and management of differentiated network services. Connecting these network functions through proven open networking standards, Contrail Networking simplifies integration with Juniper and third-party service software and has nurtured a rich technology ecosystem of partners who offer services on top of the platform. It is a key ingredient that enables service personalization and deployment of massively scalable and highly available VNFs for NFV.

Network Programmability and Automation: Contrail Networking implements the concept of “SDN as a compiler” by translating abstract high-level workflows into specific rules/policies to automate the provisioning of workloads and enable service chaining of network and security services. For example, you can request virtual machine connectivity without getting into the details of underlying elements like ports, VLANs, subnets, switches, routers, etc. In addition, a unified model for configuration, operation, and analytics is exposed through REST APIs, as well as libraries in various programming languages such as Python, Go, Javascript, and Java, to name a few.

Infrastructure Analytics and Visualization: Contrail Networking provides insights into virtual and physical networks to simplify operations and decision making through proactive planning and predictive diagnostics. The analytics engine is designed for very large-scale ingest and querying of structured and unstructured data. It is exposed using REST APIs and a GUI-based query engine. This gives the user better insights to easily diagnose issues in the infrastructure, as it provides both real-time and historical information on application usage, infrastructure utilization, system logs, network statistics like flows, latencies, jitter, etc. In addition, users can employ REST APIs and modern bid data frameworks like Hadoop to write custom applications for reporting and infrastructure automation.